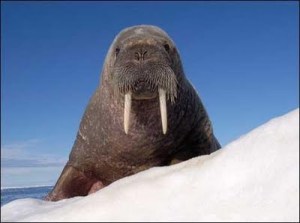 Obviously enough, the walrus in the kitchen sink was somewhat of a giveaway. However, Mrs Parallelogram still claimed it was an accident. She claimed that she was just cycling past the zoo when the walrus fell out of the sky into the wicker basket on the front of her bicycle.

She also claimed not to know the walrus was the property of the zoo. Despite the If Found Return To [the zoo’s address] stamped in waterproof ink on the underside of the walrus’s front left fin.

Mrs Parallelogram, however, claimed that she thought the walrus was – quite obviously – migrating south for the winter and had simply fallen out of the sky due to sheer exhaustion. She said she was an avid watcher of BBC wildlife programmes. Consequently, she knew all about the migratory patterns of walruses, which always fly south for the winter. Along with the penguins, who fly in the opposite direction from south to north as the cold weather makes living at the South Pole somewhat awkward. This is especially so with the South Pole’s limited mobile phone coverage and the lack of any decent TV during the Christmas period.

As Mrs Parallelogram said at her trial, ‘Can you imagine what Christmas TV is like for penguins? They spend all year round in the bloody snow, freezing their wings off. Then just when they fancy a bit of seasonal good cheer, everything up to and including the TV station idents gets covered in snow. To them it seems like the TV stations are just rubbing their beaks in it.’

The prosecution, of course, called the famous wildlife documentary maker, Sir David Attenborough. He swore that it was established fact that walruses were not a migratory species and did not fly south for the winter. Furthermore, he stated categorically that walruses were unable to fly.

However, counsel for Mrs Parallelogram’s defence pointed out the increasing use of fakery in wildlife documentaries. Something, which under cross-examination, several wildlife documentary makers and naturalists employed by those programmes had to admit was true.

The counsel for the defence then forced those naturalists to concede that it was, therefore, possible that walruses could fly and were, indeed, migratory. Defence counsel then went on to argue that the claim that walrus did not migrate could have been part of an elaborate cover-up and expenses fiddle. All, according to defence counsel, part of the wildlife documentary makers’ ongoing fraud. Disguising the fact that they did not have to travel – at great cost – to these far-flung corners of the world to get what they claimed was this exclusive footage.

The judge, therefore, in his summing up of the case against Mrs Parallelogram, said that there were already several recorded instances of wildlife TV programme fakery. This meant that the facts of the case had not been established beyond reasonable doubt.

The jury returned, after seven minutes of deliberation, and pronounced a unanimous verdict of not guilty. Mrs Parallelogram was allowed to walk free from the court without a stain on her character.

The walrus, now called Sigmund, still lives – happily – in Mrs Parallelogram’s sink. Except, of course, for the five months of the year when he flies south for the winter.