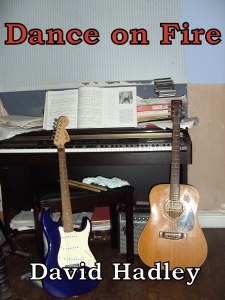 ‘So, what do you think of him then?’ Pete inclined his head towards Johnny and Matt, who seemed to be talking about cymbals.

‘I don’t fancy telling him, if he can’t though,’ Pete said.

‘Why not?’ Spike seemed genuinely puzzled.

‘Really?’ Jenny laughed. ‘But he’s only a tiny little thing.’

‘I dunno.’ Pete shrugged. ‘You just get this feeling with some blokes. I dunno… perhaps it is a male thing.’

‘Besides that, he has been in the army. He probably knows loads of ways of killing with his bare hands and all that.’

‘But he wasn’t in the bloody SAS or anything. He was only a musician, a drummer,’ Spike said.

‘Perhaps he knows of a hundred ways to kill someone with just a drumstick then,’ Pete said. ‘Anyway, he still scares me.’

‘But you work with him,’ Jenny said.

‘Only in the way a lion tamer works with lions,’ Pete replied.

What do you do when sex and drugs and rock and roll are no longer enough?

At one time, Transmission were probably the most famous rock band on the planet. Now, even as they approach their twenty-fifth anniversary they are still up there, one of the top ten bands of all time. However, each of the surviving members of the band feels something, somewhere, has gone wrong, and the rock and roll dream they used to believe in so much has become an empty and hollow routine.

Dance On Fire is an exploration of the relationships between the remaining original members of Transmission, and their manager, as the band enters their 25th year together.

The novel charts their growing realisation that rock music no longer has any meaning for them, and they are – at best – still going through force of habit – ‘We’ve become our own tribute band.’ Dance On Fire is a novel about the shallowness of everlasting adolescence and the vacuity at the heart of the rock and roll mythology.