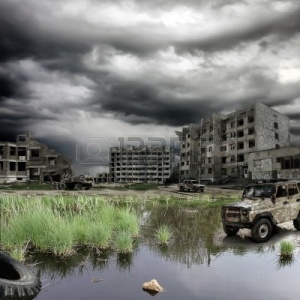 It began out here, far from any place. But the ruins still remain, showing that, long before these times, people lived here. At least, that is what the legends say. The stories were passed down from Old One to Old One, telling of the times before long ago. Times when these places rose up like man-made mountains and people knew how to fly.

Besta, the Old One now, told me how Old Ones before him, many generations ago, saw these places differently. Back then, the buildings were not overgrown, covered with creeping plants, as they are now. Back then, he said, the people could see how the people before had lived inside these man-made mountains.

Now they are nothing except habitats for wild animals.

These are dangerous places. Full of wild animals, vicious big cats and other predators stalk the twisting heaped valleys where even the ground underfoot is uncertain and dangerous.

The stories, Besta says, tell not only of the caves and shelters high in the sky in the man-made mountains, but of men burrowing under the earth to make tunnels. He says they could also fly faster than the wind.

Sometimes, I am not so sure about these stories of the Before Time. They talk of men who can fly, build mountains and travel as fast as the wind. I’ve seen how stories change with the telling around the fires, even over a few nights. I’ve heard how the big cats get bigger, their teeth and claws grow sharper, how much harder the fish fought against capture. I’ve heard how the other tribe nearly defeated us, and how much their women fought when we took them.

So, I wonder about the stories the Old Ones tell us and whether they can be that true. These places are abandoned now, full of ghosts and danger. Now I wonder if those old men from the times before were really the gods we think they were.

I wonder that, if they were so great, what happened to the people of the Before Time. Where are they now? Surely, if they could create such wonders, do such great things, then they should have lasted, should have survived. Sometimes we go hungry, sometimes the other tribes kill our men and steal our women, but still, despite this, we carry on.

So I wonder, what became of the men from the Before Time. I come back here to look out over what Besta says was called a city. I try to map out a route that one day will take me deep inside, right to the heart of this great mystery from so long ago.