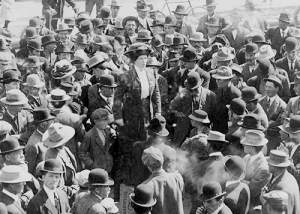 Spasmodic Troutinverter is well-known in the UK as one of the country’s leading politicians. This means that most people when they see him out in the street or in any other public place immediately take their children to a place of safety and hide themselves until the all-clear sounds.

For a long time now, ordinary people have long called for stricter controls on those people diagnosed with politics. It is becoming increasingly apparent that merely quarantining them away either in local council chambers or the Houses of Parliament is no longer keeping this country as politics-free as people had hoped. Even the emergency measure of putting those with incurable cases of politics into the EU parliament has still left several hundreds, if not thousands, of otherwise healthy people walking around the streets while infected with politics.

Although, as most of us now know, politics is not as highly infectious as was once thought. No-one these days, for example, still believes that politics can be caught from a toilet seat. Folklorists believe this belief came about as it is well known that politicians talk through their arses. So, it seemed only reasonable to earlier generations to assume that was how the disease was passed on.

We now know, however, that politics can often be transmitted by unwitting exposure to politics. Such things as accidental reading a manifesto or when caught out not changing the channels quickly enough should a party political broadcast appear on our TV screens without sufficient warning are enough to transmit the virus.

Most people nowadays are sensible enough to avoid any TV or radio News programmes. A wise precaution in case they should accidently come into contact with the political virus that does, unfortunately, infect so many in the media. Luckily, these days there are many internet sites that relegate politics to its rightful place. These sites make sure they keep politics out of the news altogether. These sites often replace political news with cute pictures of cute cats doing cute things, or photos of celebrities trying to learn how to be human.

However, Troutinverter has claimed that politics is not the deadly mind-numbing and morality sapping disease that most people see it as. He claims, mostly to the derision of those who’ve seen the damage that politics causes, that politicians do useful work for society. Unfortunately, as yet, Troutinverter has yet to come up with any evidence for his outrageous claim. Consequently, without such proof no-one not already infected with politics is likely to take his claims seriously.

Political research scientists have studied the disease, in special politics-proof laboratories, for a long time. Some of these scientists claim that there must be some genetic reason, lost in the mists of history, for why normal humans and the political disease developed this symbiotic relationship. As has been said before – and empirically proven countless times – politics is show business for ugly people. Consequently, many political scientists believe that those infected with politics do somehow – very occasionally – have sexual intercourse with ordinary people. This despite the usual adverse reaction of people when confronted by someone obviously infected with politics. Controversially, therefore, despite the limited evidence, some political scientists do believe that politics can be passed down from generation to generation, citing many cases where politicians have passed the disease on to their own offspring.

Therefore, despite Troutinverter’s pleas for us to treat politicians as human beings, most people would rather we made sure that we stopped them from breeding altogether. At least until we are sure we have forever removed the scourge of politics from our society.